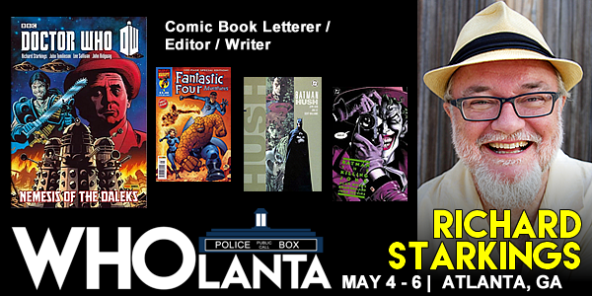 We’re very pleased to announce the addition of RICHARD STARKINGS to the WHOlanta family! Richard is the Eisner Award-nominated creator/writer of Image Comics’ Elephantmen and founder of comicbookfonts.com. He’s been involved in Doctor Who comics since the mid-80s, when he was a writer, editor, and lettering artist on Doctor Who Magazine‘s monthly comic strip. He and his company Comicraft provide the lettering for all of Titan’s current Doctor Who comic lines, and have also worked with Marvel Comics, DC Comics, Dark Horse Comics and Image Comics. If you’ve ever read iconic titles like Batman: The Killing Joke or Batman: Hush, then you’ve seen Richard’s work.

Richard will be all around our convention, making appearances in our Main, Doctor Who, and Literary programming tracks. To learn more about Richard and our other guests, make sure you visit our Guests page!

Visit the GUESTS page
Purchase your TICKETS
Book your HOTEL

We are very pleased to welcome Big Finish Productions to TimeGate for the very first time! Executive Producer Jason Haigh-Ellery and producer/director/writer/performer Nick Briggs will be bringing a universe of Doctor Who audio adventures to Atlanta next May.

Nick is best known as the voice of the Daleks,the Cybermen and the Judoon in Doctor Who from 2005-present, working on set alongside Christopher Eccleston, David Tennant, Matt Smith and Peter Capaldi. His Judoon duties also took him onto The Sarah Jane Adventures and he appeared on screen as ruthless government crisis advisor Rick Yates in Torchwood: Children of Earth. He has most recently been working solidly on the new Fourth Doctor adventures, starring Tom Baker, Louise Jameson, Mary Tamm, Lalla Ward and John Leeson. Nick’s production of Eighth Doctor adventure Dark Eyes – The Great War won a BBC Audio drama award for best online drama.

Jason is best known to Doctor Who fans as the executive producer of Big Finish Productions,which has produced over 1,100 audio and radio plays, including the highly successful Doctor Who series, Stargate, Highlander, Bernice Summerfield, Dalek Empire, Blake’s 7, and David Tennant in The Adventures of Luther Arkwright.  He is the founder and owner of Planet 55 Studios in Sydney, Australia. Planet 55 has just delivered the animated version of Doctor Who – the Reign of Terror, The Tenth Planet and The Moonbase for BBC Worldwide.

Get your weekend passes now! We’re extending the special rate of $35 through Sunday, September 13. On Monday the 14th the weekend rate will increase to $40. The at-door rate for a weekend pass is $65, so save yourself a bundle by buying early!

As we wind down from a very successful 2015 (our largest attendance ever) we’re already gearing up for 2016, and we have our first two guest announcements: Director GRAEME HARPER and TERRY “Davros” MOLLOY!

Mr. Harper’s involvement in Doctor Who stretches from him being in the studio as a very young intern when Patrick Troughton was filming his very first story, “Power of the Daleks”, to becoming one of the power directors at the BBC. He worked heavily during the Pertwee and Tom Baker eras of the show and then directed Peter Davison and Colin Baker. He returned to the show in 2006 to direct David Tennant in 13 episodes, winning a BAFTA Award in the process.

Mr. Molloy, as you’ll know, is the Davros of the 80s. He worked with Peter Davison, Colin Baker and Sylvester McCoy on television. He has reprised his iconic role in numerous Big Finish Productions. He’s also played Davros in the 2005 stage play “The Trial of Davros”.

Website updates will continue over the next couple of days. We’ll announce as soon as online sales for admission to TG’16 will be available.

We’re very pleased to announce that the wonderful folks from RetroTV, the broadcast home of Classic Doctor Who in the US, will be coming to TimeGate! RetroTV‘s run of Doctor Who began with the first two episodes of “An Unearthly Child” on August 4, 2014, showing two episodes every week night and a block of four episodes every Saturday evening. They’ll have a table all weekend so you can meet them, and we’ll be doing a Q&A in Main Programming on Saturday at 2:00. Learn how Doctor Who came to Retro, what plans they have for Doctor Who in the future, and how to get Retro in your area if your cable provider doesn’t already carry it. Plus, learn about all their other great Classic programming and maybe find out what’s coming down the pike in the future. Visit them at www.myretrotv.com 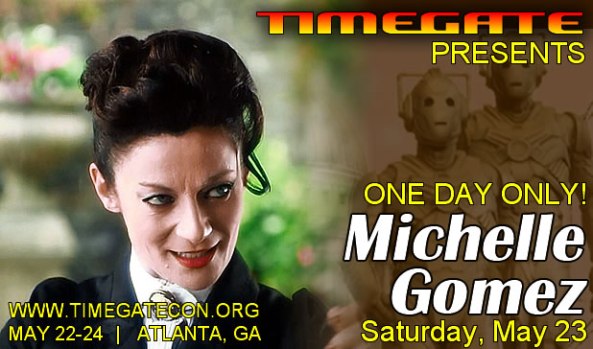 We’re very excited to welcome MICHELLE GOMEZ not only to her first TimeGate but to her FIRST CONVENTION anywhere! Fresh from her appearance as THE MISTRESS in Season 8 and having just filmed episodes for Season 9, Michelle will be on hand for Q&As and autographs on SATURDAY, MAY 23rd. Both weekend and Saturday-only passes are available for pre-sale on the Membership page. We’ll be releasing further information on autographs soon. Get your memberships now, and don’t forget to book your hotel now to make sure you get a room (available on the Hotel page). Hope you’re looking forward to a very exciting – and very bananas – TimeGate 2015! 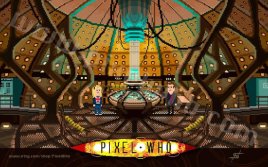 We’re pleased to welcome PixelWho back to TimeGate! Artist Nathan Skreslet and manager Ly Cao have attended TimeGate the past two years and have shown off their artwork at a fan table; this year we’re excited to be able to feature them as guests. PixelWho seeks to represent the entire history of Doctor Who as a series of 8-bit characters. They recently announced that they will be creating a new storyline arc (120 levels!) of the wildly popular game Doctor Who: Legacy called “Bigger on the Inside” which launched March 2015. Welcome back to TimeGate, Nathan and Ly!