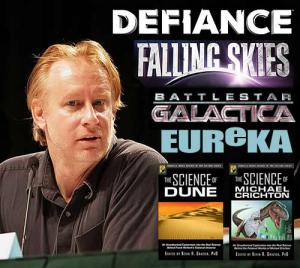 We’re very pleased to welcome back to TimeGate Dr. Kevin Grazier. Dr. Grazier is a 15-year NASA scientist who worked on the Cassini/Huygens Mission to Saturn and Titan. He was the Investigation Scientist for the Imaging Science Subsystem instrument, and wrote mission planning and analysis software that won both JPL- and NASA-wide awards. He has also served as the science advisor on numerous shows and movies, including Battlestar Galactica, Battlestar Galactica: Blood and Chrome, Eureka, Falling Skies, Gravity (the film starring George Clooney and Sandra Bullock) and the SyFy Channel’s current shows Defiance and Ascension. He has written or co-written numerous books on popular topics such as The Science of Dune, The Science of Michael Crichton and Fringe Science: Parallel Universes. His newest book, Hollyweird Science, will be out in 2015 in time for TimeGate, and a follow-up volume is already in the works.

Dr. Grazier first appeared at TimeGate in 2007. He was due to make his return visit in 2014 but was forced to cancel due to illness. We’re very much looking forward to hosting Dr. Grazier at TimeGate 2015!

Visit the Guests page to read more about Dr. Grazier and all of our other guests.