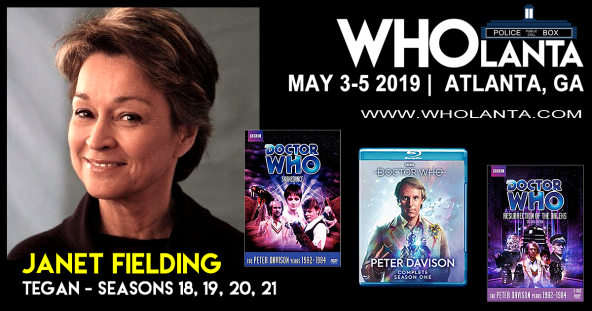 Welcome JANET FIELDING to WHOlanta! Janet is of course best known to Whovians for playing Tegan Jovanka, companion to the Fourth and Fifth Doctors. With over 3-1/2 seasons on the show, she’s one of the longest-running companions ever, and that doesn’t even count her numerous Big Finish appearances. She’s also been an agent (she got Paul McGann the job as the Eighth Doctor!), been involved in an international organization called Women in Film and Television, and currently runs a non-profit organization. She’ll be doing a couple of Q&As on Saturday and Sunday and will be available for autographs and photo ops all weekend. To learn more about Janet Fielding, visit our GUESTS page!